Shakespeare was hit by a car in 2003. He lost his left eye and fractured his beak and sternum. It’s also believed that he has decreased or no hearing on his left side. He spent a year and a half in rehabilitation at the Orphan Wildlife Rehabilitation Society in Delta, British Columbia. (O.W.L.) Wildlife caregivers determined his injuries would prevent him from fending for himself and so it was not possible to return him to the wild.

Originally Shakespeare was adopted by MARS as a foster parent to younger Barred owls. However, he wasn’t very good in this role.  He started training to become an Ambassador bird in 2006 and made his first public appearance 6 months later!

He is often heard calling to local wild owls late in the day and sometimes can be heard making “howler monkey” calls.  His age is unknown. His diet is mostly quail but he is also fed mice as an occasional treat.  He weighs about 1 kg.

Horus is a Red-Tailed hawk named after the falcon-headed Egyptian god of the same name.  He was found in 2008 hanging around the Quinsam River Hatchery near Campbell River where he was begging for food and displayed “mantling” behaviour that indicated he was imprinted to humans and probably raised in captivity.

When he was brought to MARS he was emaciated and suffered from “Bumblefoot” which prevented him from bending his toes to catch prey. MARS developed a foot cream to cure his foot issue.  He is also prone to feather damage as he many not have had a “Mom” to teach him feather maintenance.

He is a calm, older bird, well-suited to classroom visits.  He is probably more than 10 years old with a life expectancy of 20 years. He eats 1/2 quail each day and weighs about 1.3 kg. 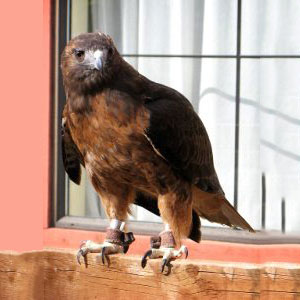 Brinley was about 3 years old when she was hit by a car in 2005.  Her right wing was so badly damaged that part of it had to be amputated.  She came to MARS in 2012 from The Raptors wildlife rescue in Duncan.

Brinley is a large bird who can be a bit intimidating but she is usually calm in public as she is used to working in front of a large audience.  She will raise her wings on command to display her amputation.  She uses her feet to catch and hold prey. Her feet have a crush force of 400 psi which equals the force of a wolf’s jaw!

She is a calm, patient bird who bonds well with her handlers and depends on them for support while out in the field. Head scratches from her handler are one of her favourite things!  She is over 15 years of age with a life expectancy of 30 years. She eats 1/4 quail and 2 mice each day and weighs about 1.5 – 2.0 kg. 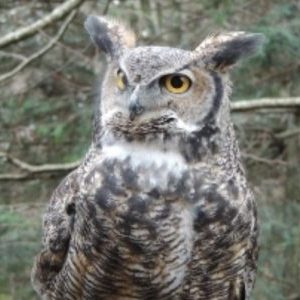 Otus Jr. is an offspring of MARS’ Ambassador bird Otus Sr. who was loaned to a research/breeding program in northern B.C.  As Otus Jr. was born into a captive breeding program in 2013, he is non-releasable due to his inability to hunt or protect himself around humans.

Otus likes to rearrange his “furniture” and frequently removes his jesses (thin pliable leather anklets). He is very chatty and often greets when approached. He has a life expectancy of about 15 years and he eats 1 mouse each day and weighs about 200 – 250 g.

Lanei arrived at MARS in March 2015 when he was about 2 years old.  He is always resistant to go to “work” and will hang upside down from his roof. But once his plans are foiled he becomes very calm and enjoys having his picture taken! He has a life expectancy of about 15 years and he eats 1 mouse each day and weighs about 170 – 230 g. 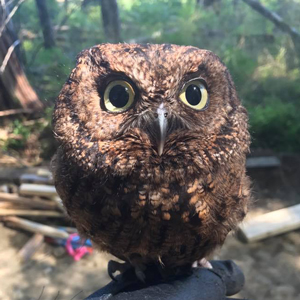 Sawyer came to MARS in August 2014 at about a year of age when he sustained damage to his right wing, possibly due to a cat attack. The damage to his wing was severe and the entire wing was surgically amputated.  He was a very brave patient, even trying to bite the vet’s fingers!  He is a confident bird whose disposition makes him ideal for classroom presentations.

In 2016 Sawyer’s right eye became inflamed and even though it was treated with daily eye drops, it did not heal.  In September 2017 he underwent surgical removal of his eye.

Sawyer likes to be alone and can get cranky at times.  During the winter cold he is housed in the MARS hospital building due his small size and disabilities.  He has  a life expectancy of 8-9 years. He eats 1 mouse each day and weighs about 70 – 100 g. 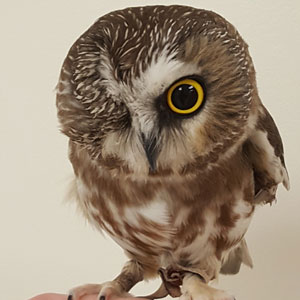 Humpty was a pre-fledgling found at the base of a tree and thought to be dead.  5 days later he was noticed to be moving and MARS was called in for rescue.  As he had suffered a great fall, his finders named him Humpty.

Upon admission he was found to be suffering from severe dehydration and emaciation.  His tail feathers were missing, but slowly grew back within his first year at MARS.  It is also believed that he has some mental deficit due to his early injuries.  He seldom vocalizes and his flight remains uncertain.  His diet consists of poultry, fish and deer meat and he weighs about 2.73 kg.

Hyacinth fell from her nest as a pre-fledgling when her nest fell apart.  MARS was called and went by boat to the site at Hyacinth Cove on Quadra Island to rescue her.

She suffered multiple fractures in her right wing that were too close to the shoulder to be pinned so her wing was taped for 4 weeks. When another eagle accidentally bumped into her later, the wing was re-fractured.  It eventually did heal but has a slight curve in the humerus so she is unable to “soar like an eagle”.

Hy is very vocal and likes to greet her handlers when they enter her enclosure. She is fairly gentle in spite of her size and gets along well with Humpty who is her permanent roommate. She also seems to enjoy the company of other eagle patients when they are housed together.   Her diet consists of poultry, fish and deer meat and she weighs about 3.5 – 4.0 kg. 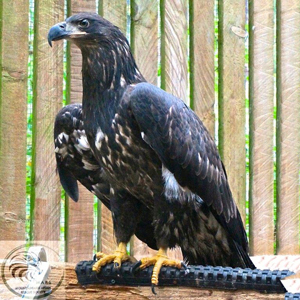