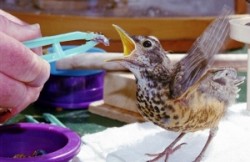 One of the first songbirds to arrive back in our local area from their winter migration is the American Robin. The largest members of the Thrush family, Robins are the one species that everyone recognizes. Adult plumage is unmistakable, especially the breeding males with their brilliant rufous-cinnamon breasts, dark-grey heads and wings and dark, beady eyes outlined in white. The females are similar to the males’ coloration but are duller than the vibrant males; juveniles have speckled breasts.

Robins’ beaks are longer than most songbirds and are designed for pulling and probing, particularly for pulling earthworms from the ground. It is fun to watch a robin locate the worm by sight and sound and then begin the tug of war: often they will use their wings to retain their balance whilst pulling out a reluctant worm.

Robins also have strong, sturdy legs enabling them to run and hop along the ground. These birds are one of the first birds to start the dawn chorus and one of the last to stop singing at dusk; they have a large repertoire of songs: some are melodious while others are raucous alarm calls if their nest or territory is threatened by an intruder. Found throughout North America, Robins were originally forest-dwellers but have gradually adapted to a variety of habitats including urban areas where they thrive on golf courses, in parks, open spaces and backyards. Earthworms are the Robins’ favourite food choice but they supplement their diet with seasonal fruits and berries and the young are fed earthworms and insects whilst in the nest. An expandable oesophagus (throat) enables them to collect and store large quantities of worms that they can transport back to the nest for the young or keep in reserve to sustain them through the night.

Robins also take the honours in producing the first babies and MARS has already received the first baby robin for this year. Females construct a cup-shaped nest from dry grasses, small twigs, horse hair, plastic scraps or anything that takes their fancy. These well-designed nests take six days to construct with over one hundred and fifty trips a day to collect materials. The final touch to the nest is a custom-made lining of mud mixed with saliva that the female transports in her mouth; whilst the mud is still damp she will sit in the nest moulding the mud to fit her body, ensuring a tight-fitting, safe nest for the young. On average six eggs are produced and Robins will often produce two clutches in one season. Incubation of the eggs takes between twelve and fourteen days and a further twelve to fourteen days for hatchlings to fledge from the nest. Hatchlings are naked and blind and totally dependent on the mother for food, warmth and protection. Baby Robins are very comical and all compete with each other for food; it is definitely an advantage to have the largest yellow gaping mouth to ensure you are fed first. The last to hatch will often be overlooked and many do not survive. Fledging, or leaving the nest, is a natural process and often the time when humans intervene thinking that the baby bird has fallen out. As soon as the young have the strength to flap and attempt to fly they will jump, glide or fall from the nest; it takes a few more days until they achieve “lift off.” During this time the parents teach them how to hunt for food but will continue to feed them on the ground.

Even when they master flight you may see juvenile Robins begging for food with quivering wings. It is critical that they be left alone to learn these skills with their parents. Many times young Robins have been kidnapped and brought to the wildlife centre, so please be sure to watch for the parents from a distance before assuming the baby birds are orphaned. If you think a nest has been abandoned please call us before intervening. If you find a baby that is still naked and blind it can be replaced into the nest (if you can locate it). As expected other baby bird and waterfowl will be arriving any day. Already MARS has six ducklings in care; these babies are very labour intensive for our centre as when they are very young they require feedings every fifteen to twenty minutes throughout the day! With our increased demand for worms we encourage families and school classes to join our worm round up and harvest worms for our birds in care.

We have also welcomed our first Intern students for this season: they provide an invaluable service to us during the busy spring and summer months and in return they learn hands-on whether their careers will involve wildlife or veterinarian studies!

For more information on what to do if you find a baby bird, racoon, deer, or any other species, or to report injured or orphaned wildlife, please call 250-337-2021