Our non-releasable Ambassador Birds are living out their natural lives
comfortably — with room service — in safe and private enclosures
at MARS Wildlife Rescue Centre.

Some of the raptors who have become Ambassadors suffered devastating injuries that prevented them from being returned to the wild, while others have become habituated to humans for various reasons. All have found new purpose helping to educate the public about wild nature. To keep these raptors, MARS applied for permits and continues to meet government regulations for their appropriate care. 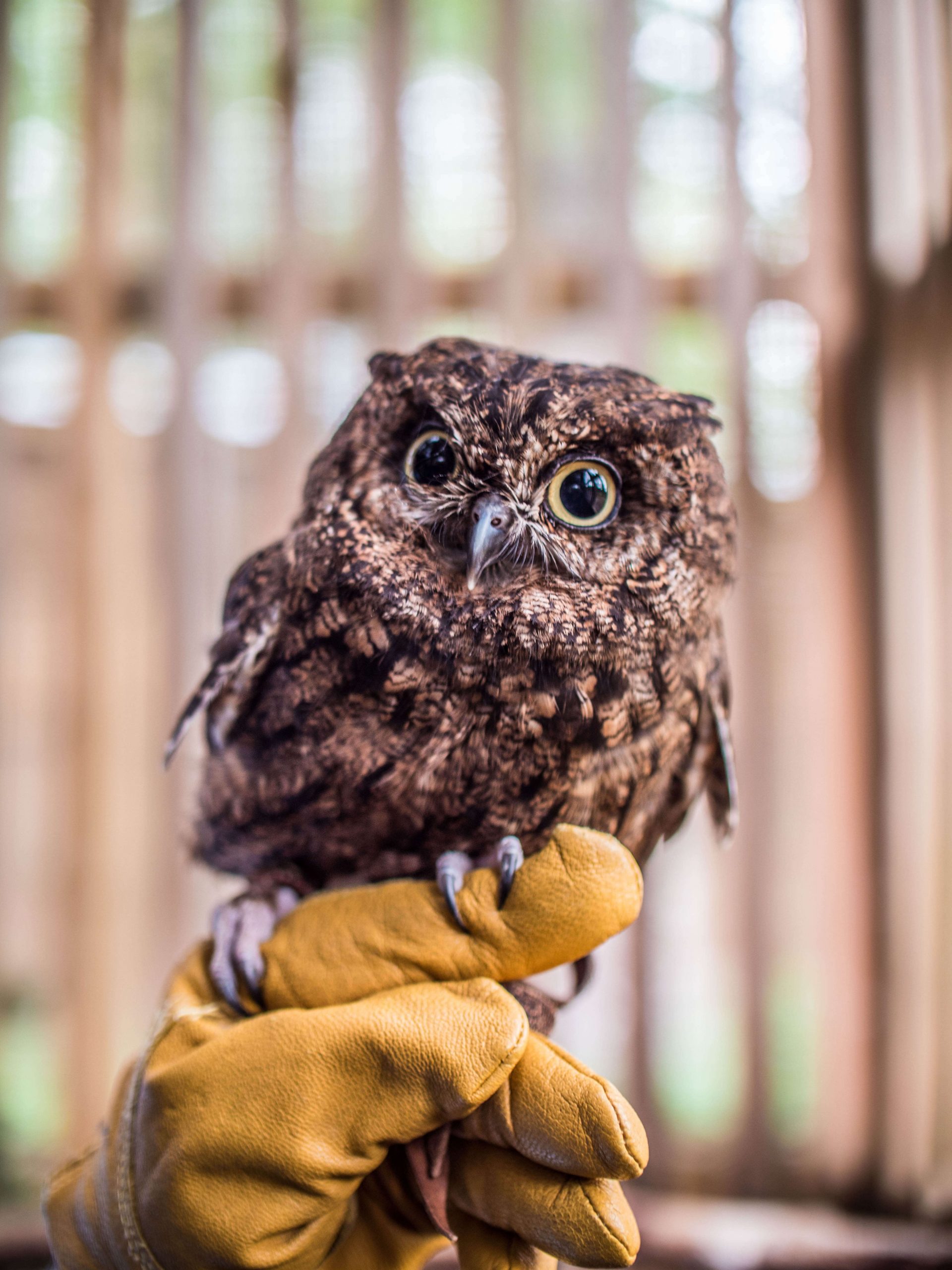 Lanei arrived at MARS in March 2015 from a research and captive breeding program for Western Screech Owls in Northern BC when he was about 2 years old. These birds are threatened and are protected under the federal Species at Risk Act. Lanei is non-releasable due to his inability to hunt or protect himself from predators. MARS’ late Ambassador Screech Owl, Otus Jr., was also from this same program.

Lanei can be resistant to go to “work” and will hang upside down from the roof of his enclosure. But once his plans are foiled, he becomes very calm and enjoys having his picture taken.

Western Screech owls in captivity have a life expectancy of about 15 years.  He eats one mouse each day and weighs 175 – 250 g. Lanei is a very quiet bird with a very sweet personality, and usually keeps his ear tufts down, so he often presents himself as a very well-rounded owl! 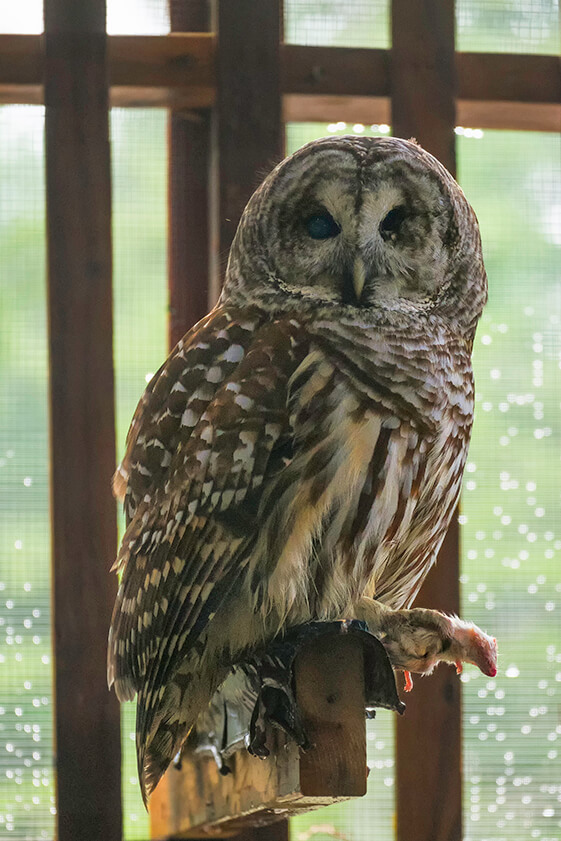 Shakespeare was hit by a car in 2003. He lost his left eye and fractured his beak and sternum. It’s also believed that he has decreased or no hearing on his left side. He spent a year and a half in rehabilitation at the Orphaned Wildlife Rehabilitation Society in Delta, British Columbia. (O.W.L.) Wildlife caregivers determined his injuries would prevent him from fending for himself and so it was not possible to return him to the wild.

Originally Shakespeare was adopted by MARS as a foster parent to younger Barred Owls. However, he wasn’t very good in this role. He started training to become an Ambassador bird in 2006 and made his first public appearance 6 months later.

He is often heard calling to local wild owls late in the day and sometimes can be heard making “howler monkey” calls. His age is unknown. His diet is mostly quail, but he is also fed mice as an occasional treat. He weighs about 1 kg. 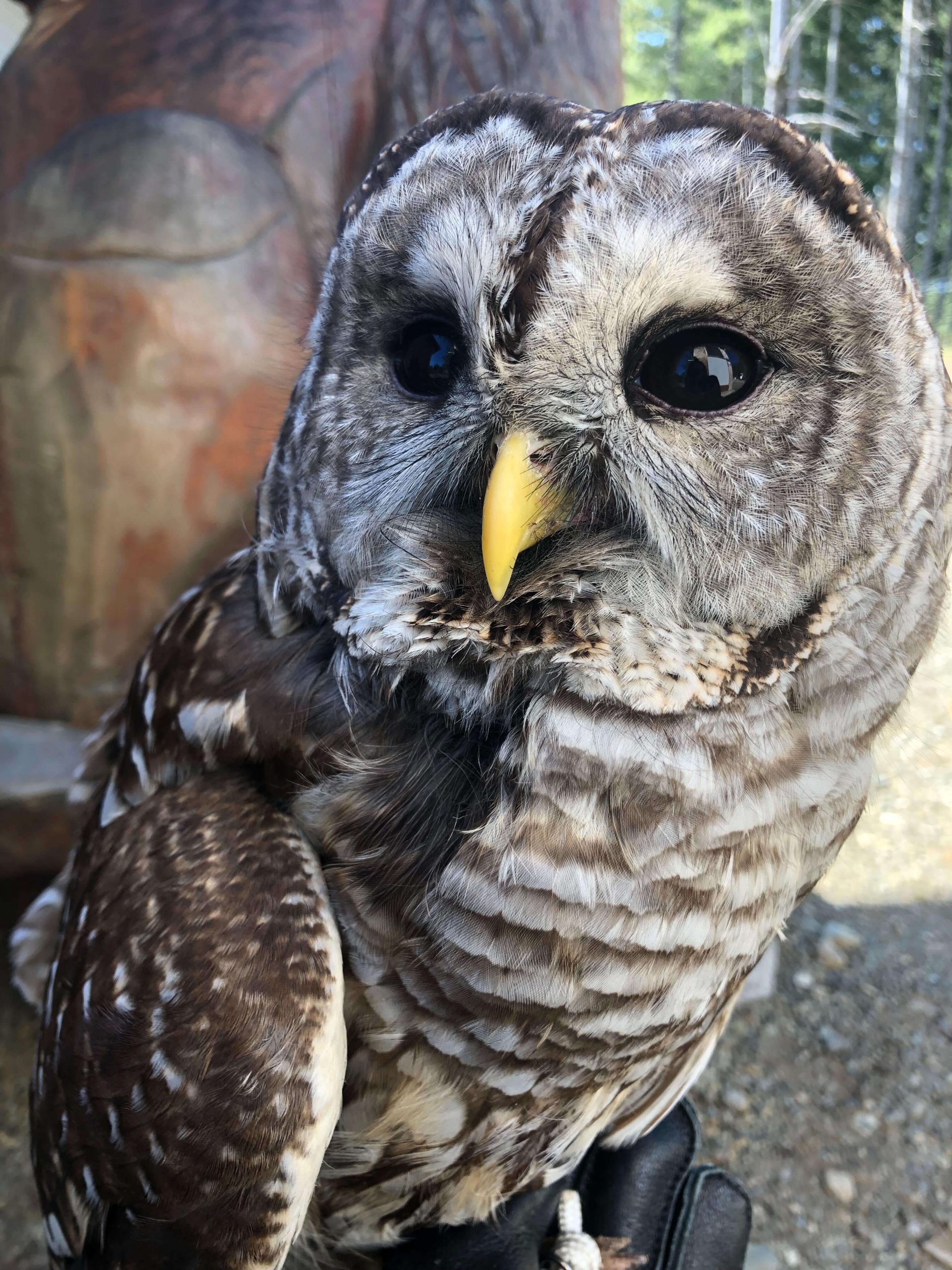 Marlowe came to MARS in the fall of 2019 after hitting a window in Comox in the middle of the night. The home owners found him and brought him to our wildlife hospital the next day. He showed many signs of severe head trauma, and we weren’t sure if he could even see properly. He showed no threat avoidance, and was extremely docile.

He saw several vets who determined there was no reason Marlowe should not be able to see, and that it was most likely the head trauma that was causing him not to react to movement or oncoming threats. He struggled to eat for the first several months with us, and progressed from being force-fed, to handfed, to eventually eating on his own without any help from the caregivers. He has been Shakespeare’s roommate for most of his time at MARS, and the two get along with very well.

Marlowe has progressed a great deal since arriving with us as a patient, but nowhere near enough to be successfully released into the wild. He gets his name from Christopher Marlowe who was William Shakespeare’s friend, collaborator, and (at times) rival.

Marlowe is a very gentle bird who was born in the spring of 2019, with an expected lifespan of upwards of 20 years in captivity. He typically weighs about 600 – 700 grams, and eats two mice a day. 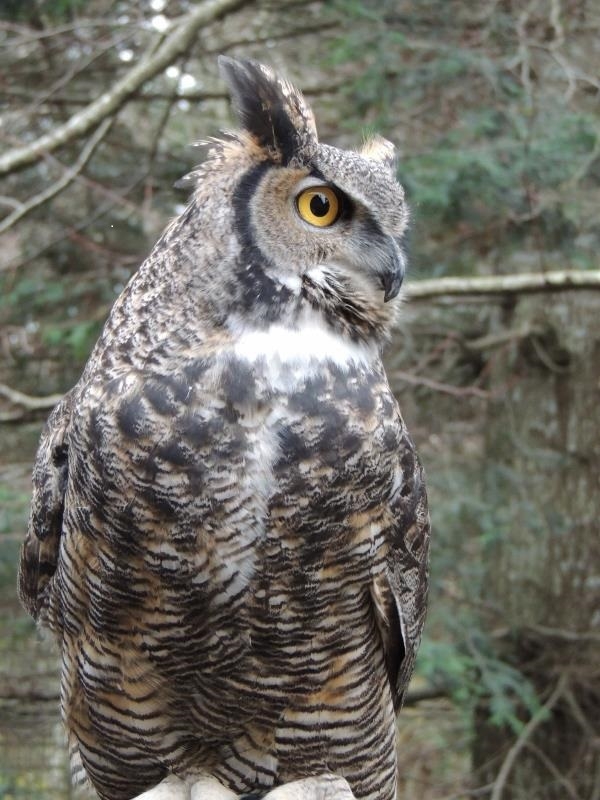 Brinley was in full adult plumage when she was hit by a car in the Lower Mainland in 2005. Her right wing was so badly damaged that part of it had to be amputated. She came to MARS in 2012 from The Raptors wildlife rescue in Duncan.

Brinley is a large bird who can be a bit intimidating, but she is usually calm in public as she is used to working in front of a large audience. She will raise her wings on command to display her amputation. She uses her feet to catch and hold prey. Her feet have a crush force of 400 psi which is equal to the force exerted by a wolf’s jaws!

She is a calm, patient bird who bonds well with her handlers and depends on them for support while out in the field. Head scratches from her handler are one of her favourite things. She is over 15 years of age with a life expectancy of about 25 years. She eats 1/4 quail or two mice each day and weighs about 1.5 – 2.0 kg. 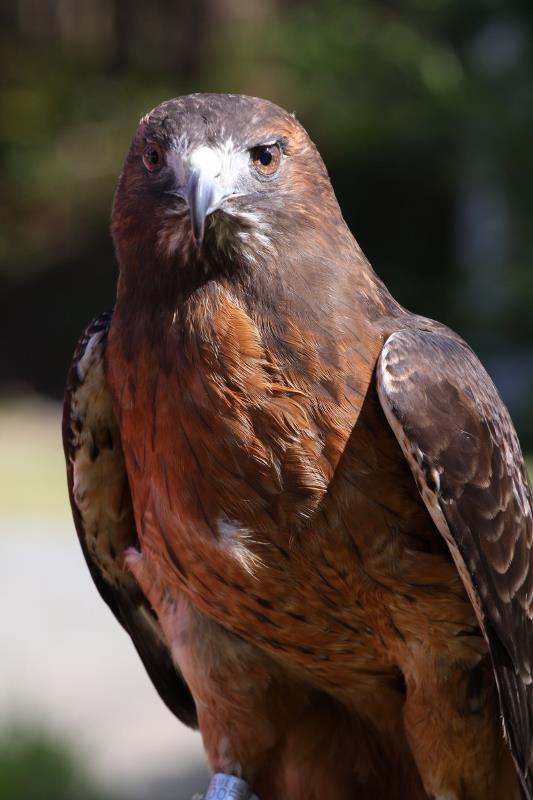 Horus is a Red-tailed Hawk named after the falcon-headed Egyptian god of the same name. She was found in 2008 hanging around the Quinsam River Hatchery near Campbell River where she was begging for food and in poor physical condition. When she was approached by one of our bird handlers, she jumped to the glove, indicating she was imprinted to humans and probably raised in captivity.

When she was brought to MARS, she was emaciated and suffered from bumblefoot, a type of infection which prevented her from bending her toes to perch or catch prey. MARS developed a cream to cure her foot issue. She is also prone to feather damage as she may not have had a “Mom” to teach her feather maintenance.

Horus is a healthy older bird whose dramatic nature appeals to all visitors. She is at least 14 years old with a life expectancy of 20 years. She eats half a quail each day and weighs about 1.3 kg. 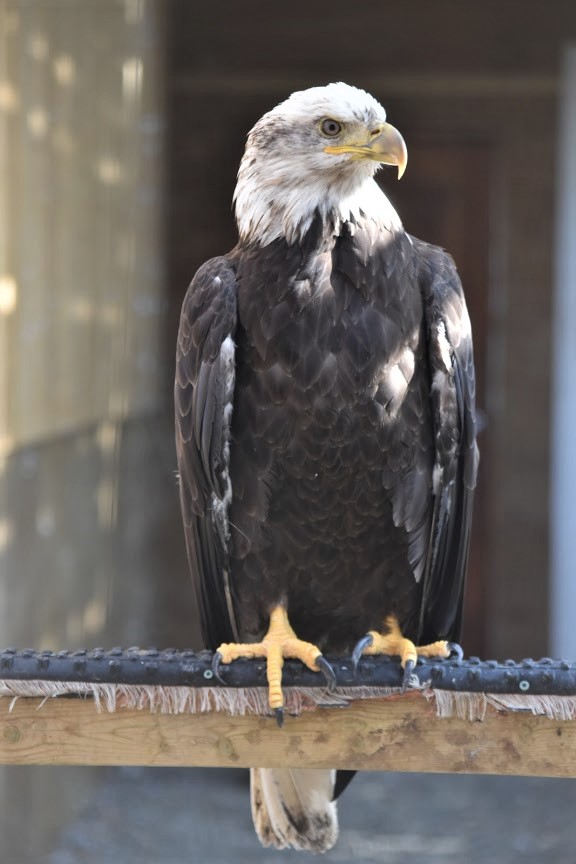 Humpty was a pre-fledgling found at the base of a tree and thought to be dead. Five days later he was found to be moving and MARS was called in for rescue. As he had suffered a great fall, his finders named him Humpty.

Upon admission he was found to be suffering from severe dehydration and emaciation. His tail feathers were missing, but slowly grew back within his first year at MARS. It is also believed that he has some mental deficit due to his early injuries. He seldom vocalizes and his flight remains uncertain. His diet consists of poultry, fish and deer meat and he weighs about 3-3.5 kg. 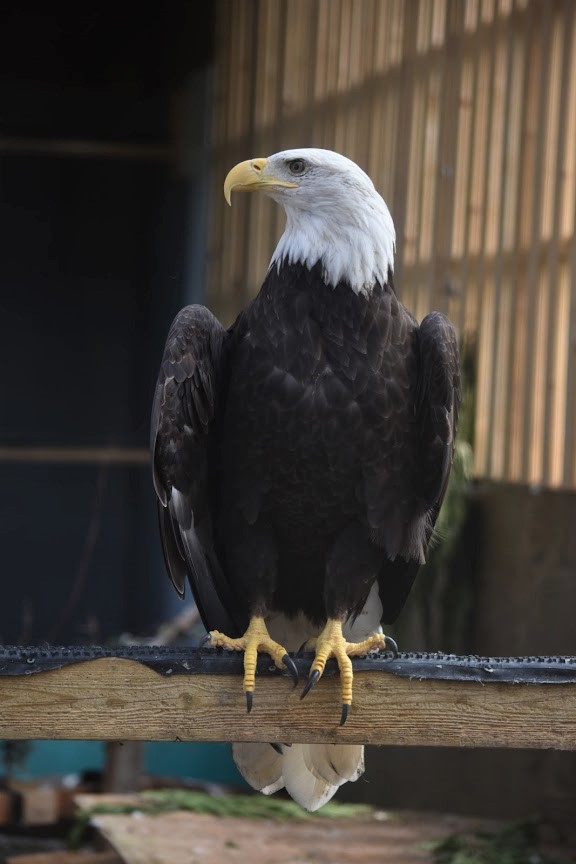 Hyacinth fell from her nest as a pre-fledgling when her nest fell apart. MARS was called and went by boat to the site at Hyacinth Cove on Quadra Island to rescue her.

She suffered multiple fractures in her right wing that were too close to the shoulder to be pinned so her wing was taped for 4 weeks. When another eagle accidentally bumped into her later, the wing was re-fractured. It eventually did heal but has a slight curve in the humerus so she is unable to “soar like an eagle”.

Hy is very vocal and likes to greet her handlers when they enter her enclosure. She is fairly gentle in spite of her size and gets along well with Humpty, her permanent roommate. She also seems to enjoy the company of other eagle patients when they are housed together. Her diet consists of poultry, fish and deer meat and she weighs about 3.5 – 4.0 kg. 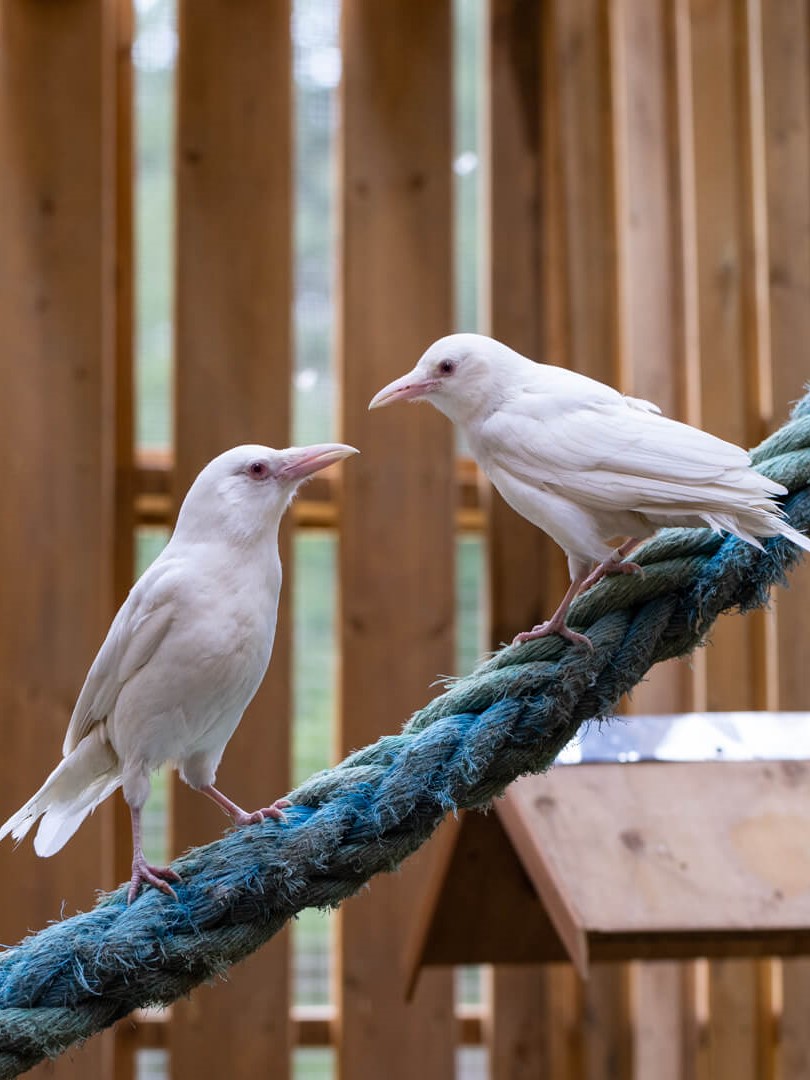 Siblings Nimpkish and Kokish arrived as juvenile birds in the summer of 2020. Finders reported that they were being aggressively mobbed by other crows. Kokish (female, on the right) had a greenstick fracture of the tibiotarsus, a leg bone. Her brother Nimpkish was brought to our hospital the next day as the attacks continued.

These distinctive birds are albinos, meaning they do not possess the pigments that would make their feathers, skin, beak, and eyes black. This genetic condition also results in very weak eyesight, extreme sensitivity to
light, and poor depth perception, making it difficult for them to find food and protect themselves. Their feathers are easily damaged as they are missing the melanin that contributes both colour and strength. Because their feathers reflect light, albino birds have difficulty staying warm in winter. All these factors lead to a veterinarian determining that the pair would have the best quality of life by becoming Ambassadors at MARS.

Their names reflect their origin: these crows were born in the traditional territory of the ‘Namgis First Nation on northern Vancouver Island, which encompasses the Nimpkish and Kokish watersheds.

Nimpkish and Kokish have distinctive behaviours and a fascinating relationship. 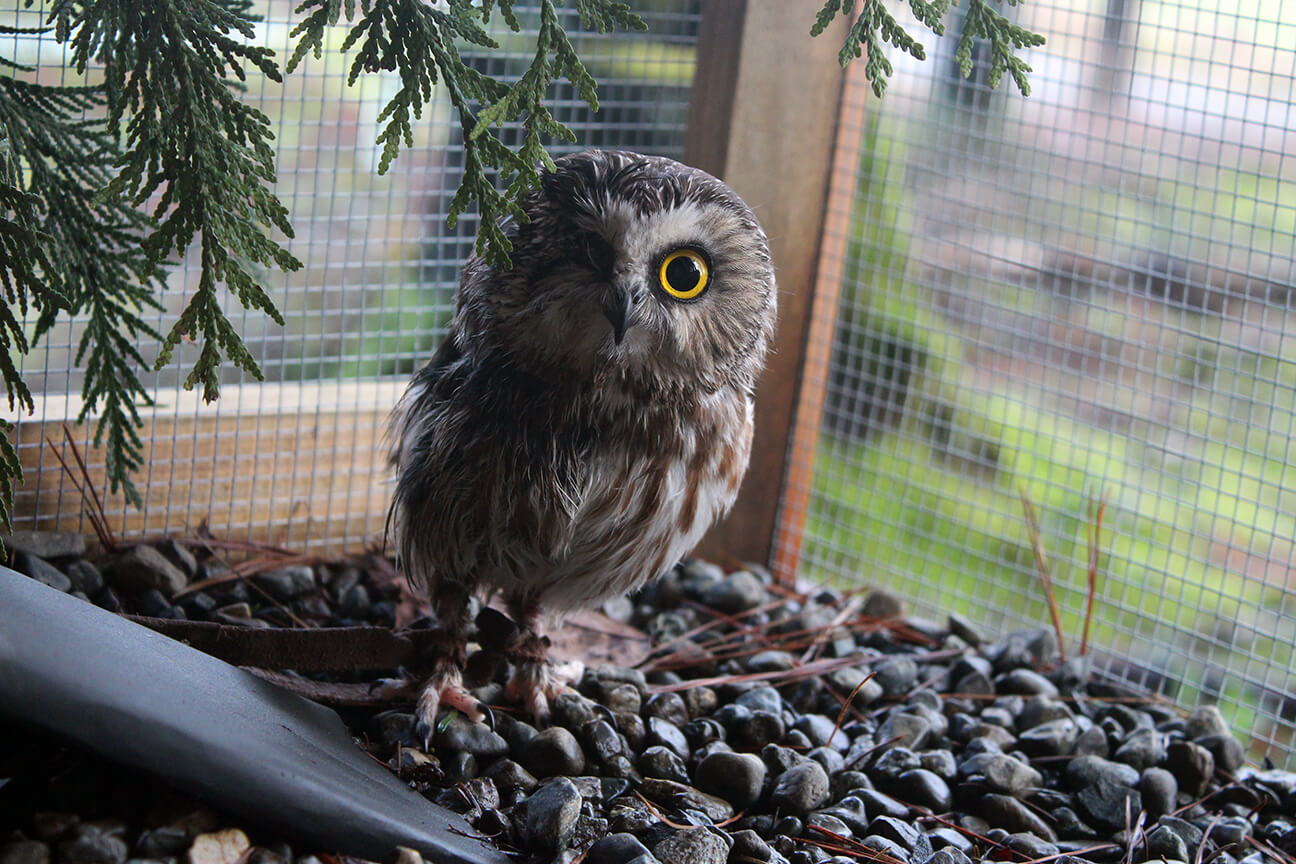 Sawyer had been with MARS since August of 2014 when he sustained damage to his right wing, possibly due to a cat attack. The damage to his wing was severe and the entire wing was surgically amputated.  Because of his injuries he could not be released, so was adopted into the MARS ambassador family.

In 2016 Sawyer’s right eye became inflamed and even though it was treated with daily eye drops, it did not heal.  In September 2017 he underwent surgical removal of his eye.

As a MARS ambassador, our little one-winged, one-eyed owl was among our fiercest birds. His small size and oversized personality made a lasting impression on all our visitors, young and old.

Sawyer’s job was to educate the public about owls and other wildlife, and help visitors feel a connection to the natural world. In the six years he spent as part of this program, he made an impact on the lives of hundreds of people of different ages from all over the Valley and beyond.  He passed peacefully at MARS in late January, due to old age, surrounded by those who loved him. 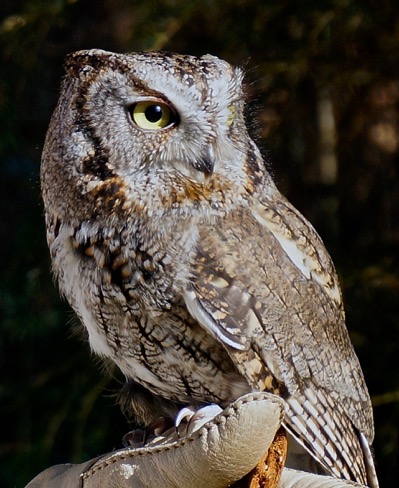 Otus Jr. was the offspring of one of our previous ambassador owls who had participated in a captive breeding program for the threatened Western Screech Owl. Once the program was no more, Otus and his roommate, Lanei, were sent to MARS to live out their lives because they would not be able to fend for themselves in the wild.

Otus joined the MARS family in 2014 and became a mainstay of our education program. He visited local classrooms, attended community events, and did many on-site presentations during his lifetime. He was always content to get out and sit on the glove of a handler, many of whom shared an incredible bond with him. Handlers would often find Otus with his ear tufts up, ready to have a chat when they entered his enclosure to catch him up for his working day. He had a huge impact on all of us at MARS and had many fans out in the community.

In the end stages of his life, Otus became very ill with severe internal infections. After visits to several different vets and a number of tests that showed an increasingly poor prognosis, we decided that humane euthanasia was the kindest option for little Otus. He passed away at MARS in early February, surrounded by those who loved and cared for him.