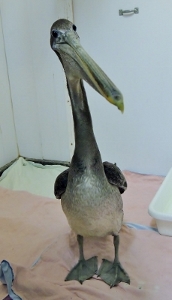 Six years ago I had my first “up close and personal” experience with a very unique bird. Gregarious and comical by nature the Brown Pelican is a very endearing bird that is quite at home around people. These pelicans are found along the southern reaches of the eastern and western seaboards of North America. Migration takes them from southern California to Mexico and as far south as Chile; their summer boundary is usually off the coastline of Southern Vancouver Island. One of seven categories of pelicans, Brown Pelicans prefer shallow water along the coastline and rarely venture more than 20 miles off shore. They usually roost on sandbars and spits, but are quite at home on docks, piers or pylons, and more recently a flock has been seen in Victoria’s inner harbour. Waddling clumsily from side to side when walking on land, they become extremely graceful in flight, gliding above the water in search of food.

Brown Pelicans are large, stocky birds that weigh between 3 and 5 kilograms; they have long wings and short legs and tails. Their best known feature is their huge beak, well known for its “gular pouch”, which hangs off the lower mandible and is used as a huge, expandable fishing net. This elastic pouch truly can “hold more than its belly can”, holding up to 10 litres of water and fish. When fishing, these pelicans tuck their wings back against their body and dive like a torpedo into the water; extra air sacks and air pockets in its bones make the pelican extremely buoyant and the bird is able to pop back up to the surface with its catch. Once the pouch is drained of water the head is thrown backwards and the fish swallowed; the pouch is also used as an air conditioner in hot weather, the moistened pouch is fluttered, lowering the body temperature. Brown Pelicans will also use the White Pelican’s mode of fishing, which requires the pelicans to beat their wings on the water while swimming in a circular formation, herding the fish into shallow water, where they are scooped up from the surface into the pouch. Favourite fish for pelicans are anchovies, sardines and herring; they are often forced to share their catch with the gulls that will sit atop their heads or even on their backs, waiting for a hand out.

A Brown Pelican’s plumage is dramatically different during the breeding season; they are transformed from dull grey-brown to a vibrant combination of black, white and red on the neck and head. The most dramatic changes are the black eyes, which turn blue, surrounded by bright pink skin, and the gular pouch that turns bright red. It is not often that Brown Pelicans are seen in this plumage as they tend to breed in remote islands, devoid of any mammalian predators. Populations of these birds have fluctuated over the last few decades. They were on the endangered species list mainly due to DDT and other pesticide poisoning, which was especially hard on their reproduction. These pelicans incubate their eggs by standing on them rather than using their body heat, this caused the eggs to break as the chemicals produced thin, fragile shells. They were also hunted for their meat and shot for their feathers, which supplied the early millinery trade.

Although M.A.R.S. has not had a Brown Pelican in care since 2006 there have been yearly sightings along the shores of Vancouver Island and the indications certainly point towards “climate change”. It is normal for the pelicans to follow the food source, which also head north to our area. But, with cooler late spring temperatures and a longer, drier summer and fall, the balance is definitely changing the habits of some animal and bird species. An injured Brown Pelican was rescued in Tofino in early December and brought to our center and he was nicknamed ‘Tuffy’. This bird was not only starving, but had sustained some significant injuries to its neck and beak; a large portion skin on the back of its neck was missing, suggesting an attack by a sea lion or other predator, and an injury to its pouch, which could indicate snagging by a fishing hook. Tragically, ongoing perils faced by these birds continue; it was hard to watch the oil spill in the Gulf of Mexico showing hundreds of pelicans that perished from oiled feathers. Increased numbers of tankers in already crowded shipping lanes and proposed new pipelines will pose new hazards to many bird and mammal species.

It looks like we will have the latest pelican for a while as his injuries will take time to heal, we will need to use a lot more resources for this semi tropical bird. To report injured wildlife please call toll free 1-800-304-9968 or 250-337-2021 for enquiries.

Note: After Christmas Tuffy was sent to WRA, in Burnaby, where they have better facilities to care for water birds.