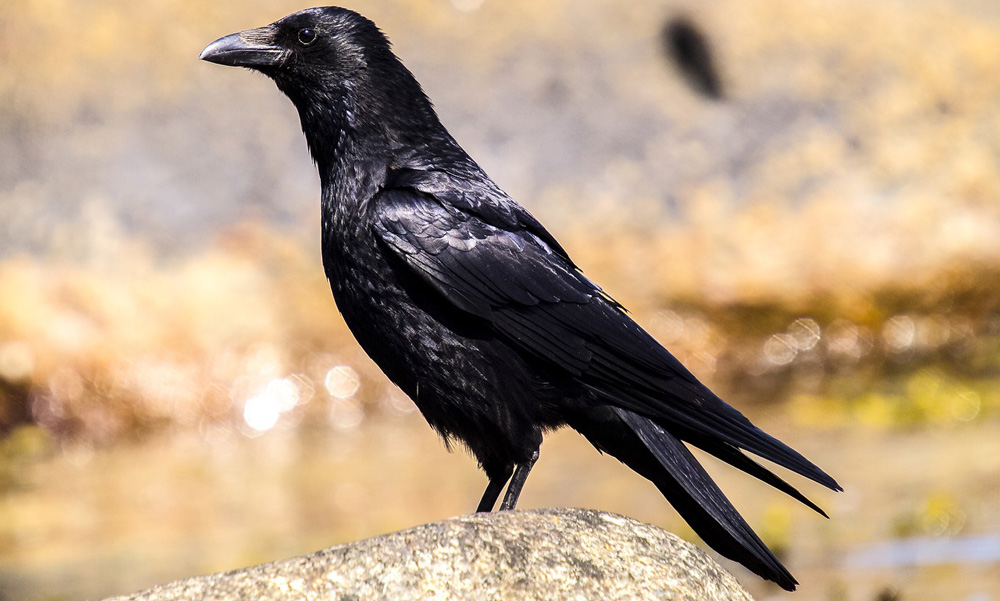 Love them or hate them Crows are considered to be one of the most intelligent of birds.

With few exceptions Crows are found world wide, Vancouver Island is home to the Northwestern Crow, American Crows are also found in the Vancouver area. Crows can be distinguished from the Common Raven by their beaks and overall body shape, both being smaller and less stocky. Tail shapes, square for Crows wedged shaped for Ravens also help identify them.

Black coloration enables Crows to recognize each other during the day, when roosting together at night it provides great camouflage and protection. Far from being endangered Crows have survived in great numbers, mostly because they are opportunistic feeders, eating anything they can find. Being highly intelligent they know where the best food source is, hiding it for later consumption. They have also figured out ways to open nuts or shellfish dropping them onto roads where cars run over and open them up! Their social interaction and communication has also contributed to their proliferation. If attacked or in distress other Crows will flock to protect to each other, they will loudly ward off predators. Other calls may be telling each other where food supply is abundant, often garbage we have provided for them.”Bob” is a 2003 juvenile who came to us from a school yard. We became aware of “Bob” from a call to MARS, regarding a Crow aggressively harassing students. Observing the Crow at the school, it displayed normal behaviour for a healthy young bird, exploring paper and other objects with its beak. It was not long before a small student, of whom Bob was fearless, came along to play (students had been informed to leave the birds alone by the school). However, when the “Rescuers from MARS” moved in, Bob was gone. This bird was imprinted on children recognizing them as a food source and when food was no longer offered Bob became aggressive in his demands. Fortunately Bob was kidnapped, and after a short stay incognito in a small student’s basement, he was turned over to MARS.

Apart from some minor intestinal problems he was otherwise healthy. He was placed with a Wildlife rehabber who has permits to keep imprinted Crows releasing them only when they recognize their new home. It is important also to remember that Crows are highly susceptible to West Nile Virus (currently no reported cases in B.C). MARS is part of the collection program for this disease, and we discourage people from handling Crows or any other wildlife. After “Bob’s” exposure to humans his ability to function in his natural habitat was severely diminished. He became a menace to many small children around the school, swooping over their heads in search of candy or chips – an unhealthy diet for a young bird. This case once again reminds us that some wild birds can be easily imprinted on humans, it is also illegal to capture and confine any wildlife.