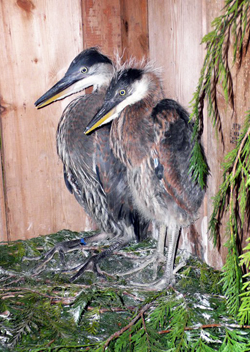 The shorelines along the eastcoast of Vancouver Island, from Parksville to Campbell River, are home to one of the most easily recognized shore birds: the Great Blue Heron.
This elegant, graceful bird is also fiercely territorial and a stealthy, patient hunter. Great Blue Herons can alter their appearance by hunching over to resemble a rock or elongating their bodies and necks to blend into the marsh land, virtually disappearing into the reeds.
Standing approximately one meter tall and weighing up to two kilograms, Great Blues have a 180 centimetre wingspan and can cruise at speeds between 32 and 48 kilometres per hour.
Large rounded bodies are supported by long fragile-looking legs and large splayed feet that are partially webbed, allowing them to walk across aquatic vegetation. The largest of the North American herons, Great Blues have blue-gray body feathers with black and white streaking. Their heads and necks are white with a distinct black stripe extending from the outer corners of the eyes to slender black trailing plumes at the back of the head.

During mating season both sexes grow additional plumes on their breasts, flanks and backs; when seen together with their more vibrant feather colour they are quite remarkable.

Habitat for these herons includes, shallow shorelines, estuaries, marshes and wetlands with both fresh and salt water. Their habitat must provide suitable secluded nesting sites where they will congregate in a heronry or rookery.

A graceful yet powerful flier, a Great Blue Heron’s territory covers about three kilometres. Easily recognised in flight, Great Blue Herons fold their necks back resting their head between their shoulders, legs trailing behind as they fly with slow, deep wing beats.

Standing motionless with only their eyes and heads moving, Great Blues are patient hunters standing in shallow water poised to attack when a tasty morsel passes by. Equipped with a very long, sharp beak the Heron will use its beak either to stab or, like a pair of tongs, to snap up its prey, reposition it with a toss of a well-plumed head and  swallow the catch head first. Repositioning prey, especially fish, prevents the throat being cut by sharp spines and prevents the Heron from choking if the fish is too large.

Although fish are the main prey, Herons will also eat a variety of food including mice, frogs, young birds, insects and other small mammals.

Great Blue Herons are very social birds, living in communal colonies away from humans; however as can be seen at Stanley Park in Vancouver, BC, Herons do adapt to urban areas. It still amazes me that these gangly creatures choose to build their nests high in the treetops; where it is not easy to land, leaves their eggs and young at the peril of predators and  offers little shelter from wind and rain.

Herons will re-use their nests and return to the same rookery for many years. They are susceptible to human encroachment and will abandon their nesting sites if they feel threatened or if the trees decay and die.

Young herons have a very tough start in life; before they hatch, eggs are often stolen by crows, ravens or other birds. Heron parents take turns incubating the eggs; once hatched both parents provide the young with pre-digested, regurgitated food until the young Herons are ready to fledge in about for ten weeks.

Very often due to the precarious location of the nests, especially the treetop sites, the young will fall from the nests when trying to exercise their large ungainly legs and wings, when this happens the young usually perish as the dense undergrowth beneath the trees makes it impossible for the parents to reach or feed them.

In the past few weeks MARS has rescued two young Herons. The first fell from a nest and was fortunate that only its pride was hurt. After being transferred to another wildlife centre it continues its recovery while being raised with another healthy orphan. We hope it will soon be returned here to be released into its home territory.

The other young heron was less fortunate, having been plucked from the nest by an eagle and taken for a ride before being dropped to the ground in Deep Bay. Numerous lacerations from the talons were sutured by MARS intern, Claire Poppe. The Heron is thriving, eating well and is certainly very feisty.

Great Blue Heron populations are stable in our local areas, but they face many environmental issues as the wetlands decrease and suitable nest sites away from humans are on the decline. It is important that we stay away from nesting areas and keep dogs away from the shoreline when Herons are present; watching or photographing them from a distance is a rewarding experience.