In the ten years I have been volunteering at Mountainaire Avian Rescue Society, this year has been the busiest Baby Wildlife Season I have ever experienced. After the late arrival of the first baby birds, we have been inundated with birds and mammals, especially fawns.

Another charming little creature we have in care is the North American Red Squirrel. We received two young Squirrels that had followed a dog home: they seemed to have adopted the dog looking for warmth, food and shelter.

First identified in Hudson Bay, these small rodent-like animals are found all across North America. The only species found locally is the Red Squirrel; the other two coastal B.C. inhabitants are the aggressive Grey Squirrel found in the Victoria area, and the Douglas Squirrel only found on the Mainland.

Red Squirrels have rusty red coats which molt twice a year; their undersides are beige and they have white circles around their coal black eyes.
Although bushy, their tails are not as full as other species, but are used to help them balance when climbing or jumping through the trees. Extremely agile, Red Squirrels have powerful hind legs and curved claws on their front feet which enable them to hang upside down on branches or tree trunks.

The silence of the forest is often shattered but their raucous chattering as they ward off would-be predators. They have a great vocal range including growls, screeches, buzzes and chirps that are often accompanied by foot stomping and tail jerking.

This Squirrel’s habitat includes deciduous and coniferous forests which provide a great food source for them: they dine on nuts, fruits, pine cones, fungi, insects, baby birds and eggs. Another favourite is maple sap; they will bite into the bark of a maple tree to free the sap and then after the water has evaporated they will return to eat the sugary, dried sap.

Squirrels are great hoarders: In the fall they collect and store food for the winter in “middens” which are marked with a scent that enables them to locate the food in the winter. Due to this practice, Squirrels are very important tree planters and seed dispersers, helping to rejuvenate forests.

Red Squirrels are solitary creatures with a small territory that they noisily defend and protect. Coming into heat only one day of the year, the female makes an exception on this day and allows the male into her territory! On average three to seven young are produced in a litter. The babies are born naked, blind and totally dependent on their mother. Weaned at eight weeks they will be independent by 18 weeks, but it is critical for them to remain with the mother until they have learned the skills they need to sustain them through the first winter. 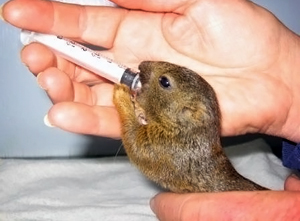 The two young Squirrels being cared for at MARS still need to be nursed by tiny bottles. I had the pleasure of doing this, and it was like trying to feed a furry eel: they are non-stop “squirmers.”

As soon as they are weaned they will be moved to a cage which resembles the forest habitat where they will be released. But first they must pass a series of tests to assess their ability to survive in the wild: they must learn to hoard or bury their food as well as find hidden food; lap water from a container; jump to branches and hang upside down; collect nesting material; and crack nuts and extract pine nuts. This process is lengthier than in the wild: to maintain their wild nature we have to watch their progress while discouraging them from habituating with humans. Only the strong will survive their first winter; many fall prey to owls, hawks, martens and domestic cats.

Please remember that as “cute” as they are, Squirrels can be very destructive: if they gain access to roofs and attics, they will gnaw on wires and wood and happily make unwanted nests. They can also be a headache for farmers when they get into storage containers and cause damage to young trees.

As with all wildlife, please do not encourage these animals by hand-feeding them: they have very sharp teeth and claws and can be unpredictable.

Once again I emphasise: leave baby wildlife alone and call us before intervening. We have been swamped with tiny deer fawns “kidnapped” by well-meaning people who assume a lone fawn is orphaned. Raising these animals is extremely time-consuming and costly and we appreciate any donations to help us through this very busy time.