Highly intelligent and inquisitive, raccoons have been nicknamed “nocturnal bandits”.  These mammals belong to the same family as Coatis and Ringtails, and they are found throughout North and South America.  They were originally hunted for their meat and also trapped for their fur; these practices still continue in some areas. 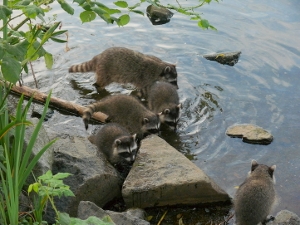 Adult raccoons can measure up to three feet in length and weigh in excess of 30 pounds.  They appear to be “cute and cuddly”, but their disposition can change suddenly, making them a ferocious foe.  Their fur is very long and dense, dark gray in color and their tails are long, with distinctive black rings around the end.  A black face mask makes them unmistakable, standing out even in the dark.  Raccoons are equipped with very sharp claws, set in black, flat feet.  These feet are very strong, enabling them to climb and open clams, oysters and other shellfish, but the front feet are nimble and are used as hands; raccoons often wash their food, and then hold it as they eat.

Raccoons are opportunistic feeders; eating fruits, vegetables, fish, meat, and birds, in fact, anything edible that they can put in their mouths.  In the fall they feed intensively, to build up their fat reserves for the winter.  Although they feed through the winter on waste fruits and grains as well as insects, they rely on their fat to see them through until spring. Because their diet is so diversified they have adapted incredibly well to urban living and they know exactly where to find, and how to get into, garbage cans.  Originally forest nest dwellers, raccoons can be found in abandoned or occupied buildings, old beaver, coyote and badger dens, or even old car bodies.  Due to their tenacity and adaptability their populations are extremely healthy. 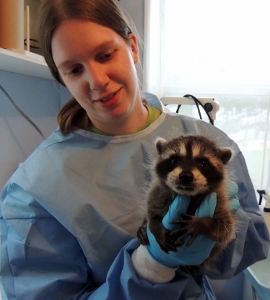 Male raccoons will have multiple mates but have no part in the rearing of the young.  When born, the cubs are only three ounces in weight and their eyes and ears are closed.  Born in a secure den, the female will nurse them, but will leave to go hunting for food.  Raccoons rescued by MARS are often orphaned, but sometimes they are kidnapped by well meaning people while the mother is away hunting.  Please leave cubs alone unless they are heard crying for more than 24 hours – they need constant care and attention and frequent nursing, which is best provided by the mother.

It is very important to remember that raccoons are susceptible to canine distemper and occasionally rabies (mostly in Eastern Canada), but more common are roundworms that can be transmitted to pets and humans.  Although raccoons appear to be “warm and fuzzy” they can become very aggressive if hand fed by people, their sharp teeth and claws can inflict some nasty wounds.  To prevent these animals from becoming a nuisance, do not feed them, make sure garbage cans are securely shut and preferably enclosed. These “bandits” are masters at pushing over and opening cans, even if it means shoving them down stairs first!  To report injured and orphaned wildlife please call 1-800-304-9968, or 250-337-2021 for all other calls.