It is always rewarding when we can successfully rehabilitate wildlife patients, as many of the cases admitted to MARS Wildlife Centre are beyond help by the time they arrive. June saw the return of two patients who were rescued last summer and fall and have spent almost a year in captivity. Initially, both birds were treated for their injuries at MARS until their broken wings healed and then sent to O.W.L. (Orphaned Wildlife Rehabilitation Society),  in Delta, where they spent several months rebuilding their strength and flight muscles in large flight pens. One had been hit by a garbage truck and managed to flip into the newly emptied bin, the second vulture was a target of an errant shot from a pellet gun which broke its wing. Unfortunately many of our patients are victims of impacts with vehicles and often sustain life ending injuries. Both vultures had badly broken wings but were fortunate to recover. 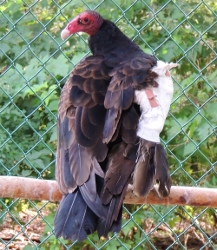 Turkey Vultures are not regular guests at MARS, which is fortunate as some of their eating habits are quite gross to watch! These vultures are a common sight in the early summer skies as they soar on the air currents, keeping a nose out for their dinner. They are migratory birds and leave for warmer climates in the Fall. Often mistaken for bald eagles, vultures are actually members of the stork family. They were known to the Cherokee First Nations as “peace eagles” which was a reflection of their non-aggressive nature. They have neither talons nor a hooked beak capable of killing or tearing apart prey; in fact they do not kill their prey at all, they feast mainly on carrion.

These birds have many unique characteristics, some of which are quite repulsive, but at the same time serve a useful purpose. Vultures do not rely on their eyesight like raptors to locate their food; they are scavengers by nature and eat rotting carrion or vegetation. In order to detect their food they rely on an enhanced sense of smell and can locate the rotting food by detecting gasses released by the decaying meat. Their keen sense of smell is due to the design of their nostrils, instead of two nostril openings the turkey vulture has one large hole that passes through the top of the beak. 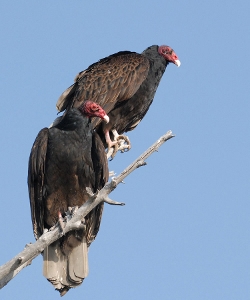 Similar in size to an eagle they do not have a white head or tail, but their heads are unmistakable. On close inspection they are covered with red, wrinkled skin. A featherless head is thought to have evolved in order to prevent feather rot, a condition that occurs when feathers collect food particles and cannot be preened clean.  Vultures feed by putting their heads inside the carcass which would definitely result in feather rot! When seen in flight it is sometimes difficult to determine the eagle from the vulture, but an easy way to tell is by the way they hold their wings when soaring on the air currents. A vulture holds its wings in a “V” formation with the leading flight feathers held apart, while eagles hold their wings straight out.

The turkey vulture’s main diet consists of meat from mammals or fish, but they also eat vegetation. These birds have an extremely efficient digestive system which protects them from catching any disease the rotting food may carry. Sometimes known as “sanitizers of the desert”, once the food is digested their waste material is sterilized and free from diseases. Nothing is wasted by these birds; they find unique ways to regulate their body temperature making sure no one intrudes on their meal. Like the stork family, vultures will use their waste materials to cool them off in hot weather.  They defecate on their legs which cools them by evaporation. Meals are protected by the bird vomiting on the food, making it very unappetizing for an unwanted dinner guest. This is also their very effective means of repelling predators.

A thank you to the grade 2/3 class from Quadra Island who joined me on a bird watching field trip – it was great to see such an enthusiastic group who learned how neat bird watching can be.