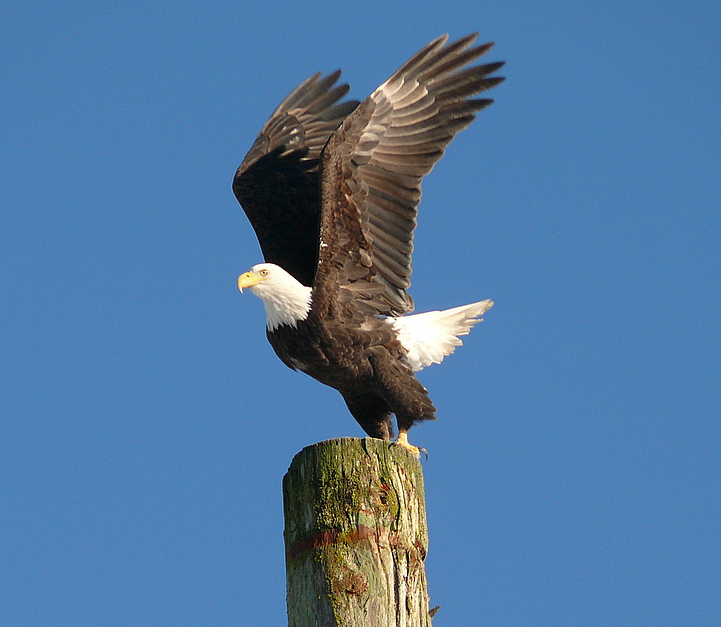 Along our misty shores Bald Eagles never fail to inspire us with awe as they soar overhead piercing the silence with their shrill screams. For thousands of years Eagles have been revered by different cultures as symbols of power, strength and courage, surviving climate changes and as recently as 1962, bounty hunters. Early settlers in this area named the Bald Eagle, not for lack of feathers but “Balde” an early English word meaning “white”.

White heads and tails of mature Bald Eagles distinguish them from Golden Eagles, however juveniles, due to their coloration, are often mistaken for them

All Bald Eagles live by water; rivers, lakes or oceans, their territory may cover several miles of shoreline and inland nesting sites. Some Eagles migrate in the winter, however our local population remains year round due to our temperate climate and plentiful food supply. The Bald Eagles’ diet consists of fish, mammals, or other birds, but they are quite happy to steal or scavenge carrion from another bird or animal. Like all Birds of Prey these Eagles depend on strong legs(which are covered in reptilian like scales), razor sharp talons and powerful beaks to catch and dispose of prey.

Exceptional eyesight is also needed, their eyes are four times keener than a normal human eye with the ability to spot prey from a mile away.They can also see fish under water. These eyes are protected by a transparent third eye-lid (nictitating membrane), and by bony protrusions above their eyes which provide shade. Strong muscles and tendons provide a “locking mechanism” for their talons ensuring their catch will not escape. Bald Eagles have been known to drown when a fish was too heavy for them to sustain flight, they will also row themselves to shore with their wings the fish still locked in their talons.

Wingspans can be seven feet and afford them various maneuvers. Due to their size they use thermal currents to soar and glide, but are also amazingly agile, especially in courtship, when they will dive “whiffing” spiraling in free falls. Other noticeable wing behavior is “mantling” when they spread their wings to protect food or their young, or “sunning” wings out-spread to absorb heat or dry feathers. Bald Eagles mate for life and will return to the same nesting trees each year, the largest one recorded weighed over a ton. One or two young will be raised by successful pairs, once hatched the nestlings are ready to fledge within fourteen weeks, at which time they will be the same size as the adults, females being larger than males. It takes five years for Bald Eagles to reach maturity. They are very vulnerable during the first two or three years when their hunting and survival skills are poor.

MARS has received two juvenile eagles in the past two weeks. Shown in the photo, this Eagle was releasable after a very short stay. It was found frozen to the ground at the Campbell River garbage dump. Due to inexperienced hunting skills in the cold and snow the Eagle was probably looking for a free meal. Eagles will often sustain various injuries at dumps, but other than hypothermia this was a very healthy bird. Powerful wings, legs and talons make rehabilitation of these birds a huge challenge. MARS cannot provide long term care for Eagles’ those needing more attention are transferred to facilities with special flight pens.

The second Juvenile had sustained an undetermined spinal injury and without use of its legs and talons would never be able to hunt or survive. Eagles are at the top of the food chain and have few predators, in the past MARS has dealt with electrocutions, gunshot wounds and wounds inflicted by inter-species fighting. MARS is also involved with the WiTS (Wildlife Tree Stewardship) program that monitors the health of nesting and perching trees in hopes of insuring a healthy future for our Eagles.