“If you love them, leave them alone.”
Each year MARS repeats this message during “Baby Wildlife Season” in hopes that we can reinforce the importance of leaving wildlife to be nurtured by their parents. Fluffy yellow ducklings are one of the many species that seem to be irresistible and prone to human interference, which often results in the babies being abandoned thus becoming orphans.

Mallard ducks are one of the most common duck species in North America and Euro-Asia. They are thought to be the ancestors of common domesticated ducks, and are still known to mate with our domesticated ducks producing hybrids. Found in shallow wetland areas they have also adapted to urban living where they are found in rivers, ponds and lakes as well as estuaries and shallow ocean shores. The majority of the ducks are year round residents; others will migrate south during the winter months. 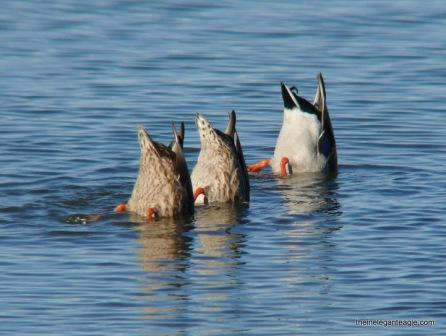 The male, or drake, is stunning in his breeding plumage: his iridescent green head and neck are ringed in white feathers, grey wings are tipped with white and blue, and the black tail is very distinct with a curly upturned tip. Females pale in comparison as they need to be well-camouflaged when tending their nest and the young. Their colour is a combination of browns-and-white streaking (with the exception of blue and white wing feathers) which hide them in the grasses and reeds along the water’s edge.

Mallards are “dabbling” ducks, meaning they forage for food by tipping up their tails whilst balancing in the water with their webbed feet instead of diving under water in search of prey. They feed on aquatic vegetation and insects that are close to the surface of the water, but they will also eat grasses and seeds and the occasional shellfish treat.

The ducklings’ can be seen jumping around in the grass catching insects and grass seeds and sometimes scampering across the water in pursuit of food. Please do not feed ducks with bread and crackers as this provides them with empty calories, constipation and a reliance on humans for future food. 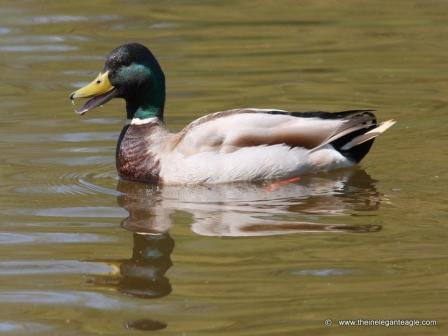 Drakes search for a mate in late summer and will stay with her until they mate the following spring. The female builds the nest and takes care of the young whilst the male takes off and begin their feather moult. A normal clutch of eggs for these ducks is between 12 and 14. Sadly only a few will ever survive to reach adulthood as many other wildlife species will dine on the eggs or the vulnerable ducklings; this is all part of natures food chain.

Ducklings are “precotial” meaning they hatch fully clad in fluffy down, their eyes are wide open and a soon as their down dries they are able to walk, swim, dive and feed themselves. However they do need they mother to protect them and keep them warm during the night. She also needs to teach them their hunting and survival skills. Once all her eggs have hatched the mother’s immediate focus is to lead her brood to the nearest body of water, A.S.A.P. which frequently is a route fraught with danger. Often nest sites are far from a water source; some ducks even nest in trees. Sometimes due to the number of hatchlings the mother can only take half the ducklings at a time, hiding the rest until she can come back for them. Roads or other human obstacles are encountered along the way and this is often the time when ducklings are “kidnapped” on the assumption they are orphaned.

MARS has already received 14 ducklings; they are high maintenance babies, needing warmth and comfort from heat lamps and other ducklings. Once them have been conditioned and become waterproof they are introduced to our “swan pond” where they can swim and dabble for food. It is amazing how fast they grow; within four to six weeks they are ready to be released back to the wild.

Please watch and wait before intervening with ducklings or any other baby wildlife (we received the first two fawns of the season this week). Call MARS before assuming they have been abandoned and make sure that pets are kept away.

Look for our information booth at various public venues during the summer season and learn how you can help wildlife.