One common bird seen along our shorelines, standing ankle deep in water, waiting patiently for its prey to come by is the Great Blue Heron. These large elegant birds are easily identified by their magnificent plumage and their ability to strike out with great speed to capture their food. There are many different species of herons in North America, many have colorful names including the white, yellow and black crowned night herons, the reddish brown, and one of the most elusive, the Green Heron.

Herons are part of a family that also includes bitterns, ibis and spoonbills. Green Herons are extremely secretive and mostly solitary birds, unlike Great Blue Herons that will gather in small flocks in shallow water and roost and nest in tree top colonies. Habitat for these diminutive herons includes estuaries, marshes, swamp land and river edges. Small, stocky birds, Green Herons stand only 44 centimeters in height and they are perfectly colored to blend in with their habitat. Their compact body sits atop yellowish legs which are not as long as the Great Blues; in the mating season their legs turn bright orange. Adult Green Herons have long, dark, pointed bills, the juvenile’s are orange. Their necks disappear into their back, giving them the appearance of being a hunchback. When preparing to strike, the Green Heron will stretch out its neck parallel to the water and, with the help of a special arrangement of vertebrae, it snaps its head forward with great speed to capture its prey. As suggested by their name, their coloration is mainly shades of green; they have a greenish black cap on their heads and similar green hues on their wing feathers. Their necks are a distinct chestnut color and juveniles have streaked necks. Unlike the striking head crest sported by Great Blue Herons, Green Herons have small crests that they raise, together with jerking tail feathers when they are threatened or excited. 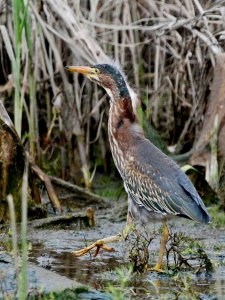 Perfect habitat for Green Herons, locally, is the Puntledge and Campbell River estuaries which provide plentiful food and places to hide. Green Herons have been described as the “best fly fisher” by Dominic Couzens in his book “Extreme Birds” (the world’s most exciting and bizarre birds). The honor was bestowed on the heron to acknowledge its intelligent use of lures and tools to catch its prey. These herons have been observed using sticks, feathers, insects, flowers, and corn which they collect from the water’s edge and toss onto the surface of the water in order to lure the fish up to the surface. Sometimes they will break off twigs to dig up insects, other times they will use their feet as “rakes” to stir up the water and dislodge food from the mud.

Usually Green Herons prefer to hunt and live alone, with the exception of the breeding season, when they will nest in the tree tops in small colonies. They will defend their territory with vocal and visual displays; stretching out their necks, exposing the red lining of their mouths, they warn other birds of their presence. Courtship for these birds is quite comical, as the male puffs up his feathers, swelling his throat and emitting a raucous call while he hops from one foot to the other in front of the female. These birds mate for life and both birds take part in raising the young. Like all fledging birds, Green Heron babies have to learn how to fly, and must spend a few days running around on the ground, exercising their wings, and growing and preening their feathers before they can achieve lift off and sustain flight. M.A.R.S. has had a significant number of baby bird calls from people who have found young birds in their back yards that were thought to be injured and many were able to be returned to their rescue location where the parents resumed feeding and caring for them.

In mid August we took care of a baby Green Heron that was found in a Campbell River backyard, the finders were not sure if the heron had been injured by cats and on examination the heron showed no obvious injuries. Creating a captive habitat for these birds is very difficult and they are highly stressed out of their natural habitat. The heron appeared to be eating well and was being prepared for release, unfortunately as so often happens, this apparently healthy heron died from unknown causes. Once again it reminds us to call MARS for advice before attempting a rescue as wildlife’s best chance of survival is with its parents. We would like to extend our continued thanks to Sunrise, Shamrock, Van Isle and Courtenay Vet clinics that are always willing to attend to our injured patients. To report injured or orphaned wildlife, please call 1-800-304-9968, for all other calls, 250-337-2021.

Thank you to Mike Yip and the late Jim Dubois for the photos featured in this article and many of our MARS Moments.