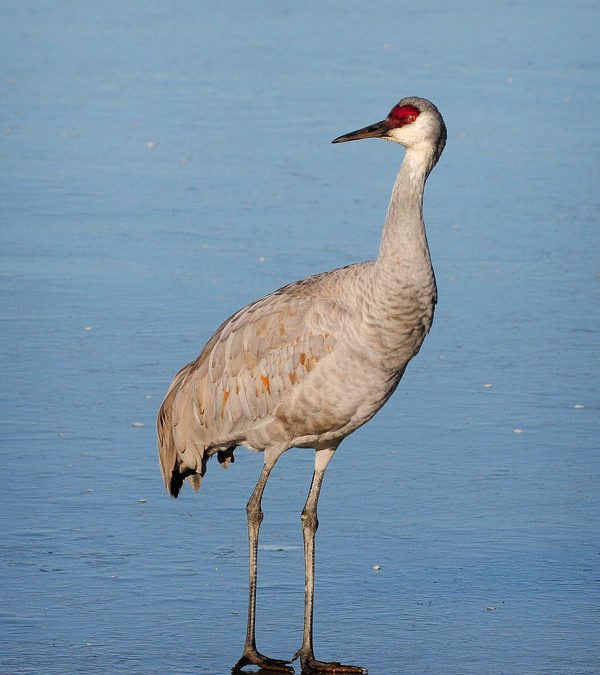 It has been said that migration is probably the most awe-inspiring natural phenomenon – one that has been studied for many years and continues to reveal amazing feats of endurance. You only have to look skyward, especially at dawn or dusk, to capture a remarkable sight as some birds start their fall migration in the thousands.

The reason that birds chose to migrate centers around their need to find a safe place to breed that also provides plentiful food for the young once they have hatched. Extended daylight hours in the Arctic produces an abundance of plant and insect life, which enables the young to rapidly build up the fat reserves necessary for them to successfully fly to their winter feeding grounds before the harsh winter settles in. Not all birdlife migrate long distances and some do not migrate at all, whilst others move to higher elevations or follow a food source along waterways or shorelines. Many different species make their annual migration using both day and night times. Depending on the size of the bird, usually the larger the bird the more likely they are to migrate during the day time. Flying formations also help the birds to conserve energy. The best known “V” formation allows the trailing birds to be pulled along in the slipstream and the lead bird will fall back in position when it tires and another will lead the flock.

There are many major migratory “flyway” zones in the world that have been used for thousands of years; these include Europe to Africa or Asia, North to South America and Asia to the southern hemisphere. Closer to home there are two major migratory routes: the Pacific Flyway from the Arctic to South America, and the Central flyway zone that travels north to south east of the Rocky Mountains.

Migration entails travelling over many types of terrain including mountains, oceans, deserts, open-ocean and coastlines. During their arduous trek they will encounter high winds, heavy rain or snow, excessive heat and any other elements nature has in store. Birds instinctively seek out favorable conditions that will conserve their energy, such as tail winds and thermal currents which provide them with a free ride. Often they will use thermals to condition them before they make the final decision to start their migration; a perfect example of this flocking behaviour is in the Californian desert where white pelicans ride the thermals in huge flocks gaining strength and stamina. Most migrating birds will have “stop over’s” where they can refuel and rest before moving on, others make the trip without stopping. There are myths that hummingbirds “hitch” rides on the back of geese, but this is unfounded.

Locally the fall migration is well under way; I had a report from a local farmer that there was a huge noisy flock of large birds that had landed in her fields. From her description they were easily identified as sandhill cranes. These enchanting birds have regular stops in the Comox Valley, part of their southern migratory route to South America; they are usually seen or heard in flight as they do migrate in both daytime and night time. Unmistakable by the flight formation which is not a tidy ‘V’, but a loose array of shapes that reform as they fly. If there was any doubt to their identity their continual chatter gives them away – no “honking” for cranes.

How do birds know where to go and how to get to their winter destination with no maps or GPS? It has been proven that birds do have their own kind of map and compass. They use the sun and the stars together with landmark recognition to track their route. They are sensitive to barometric pressure and magnetic fields and use this information to avoid heading into major storms. It is also thought that they use their sense of smell to detect the sea and shorelines if they cannot locate them visually.

Armed with their fat reserves and flight conditioned, the birds are ready to set off on their perilous journey. Due to the incredible distances’ these bird have to travel, many of them do not make a successful migration, especially the juveniles. Other than natural hazards for these birds, urban areas are also presenting them with problems; lighted high rise towers have been blamed for millions of fatalities as the birds hit the buildings. We remind people who are out enjoying the crisp fall weather to keep dogs and children away from the shorelines when birds are feeding. The Comox valley and Campbell River estuary are important fuelling stations for migrating birds, especially water birds. Any time now the trumpeter swans will be arriving and they will spend the winter feeding up, ready for the quick turnaround – in only a few short months they will return to their breeding grounds, completing the next migration. Please make sure you change any bird feeders regularly, many birds are choosing to stay year round and expect to find food at your feeders. With so many early winter storms already, we expect to see many unusual visitors this winter.