Aerodynamically designed for speed, Merlins belong to the family of Falcons; the Peregrine Falcon is the fastest flying falcon but the Merlin is a close second, attaining cruising speeds in excess of 70 kilometers an hour. Also known as a “Pigeon Hawk”, this name not only implies their partiality to dining on pigeons, but also reflects the similarity in the air to the flight pattern of a pigeon with rapid wing beats and lengthy swoops. In ancient times Merlins were a popular falconry bird, especially suited to the ladies of nobility, as they were considered to be dainty and easily managed by a lady.

Merlins are migratory birds, but during the spring and summer can be found in BC in open coniferous forests, by lakes and ponds, and along the shoreline. They are becoming more at home in urban areas and are a common site at the backyard bird feeder; unfortunately, they are usually on the prowl for an easy meal! Comparable in size to a Blue Jay, Merlins can be recognized by a dark line that extends down the face from the eye, resembling a moustache or sideburns. Seen from above the male’s back and upper wings are a dark gray-blue-black, the females and immatures are a dark brown. From below, their breasts and bellies are streaked with brown and cream; their long pointed wings have a spotted pattern, their long tails are banded with dark brown and cream. The Merlin has a hooked beak that is black with a yellow band across the nostrils, and, like the Peregrine Falcon, are equipped with pea-like “baffles” that reduce the impact of air rushing into the nose during high speed flight. 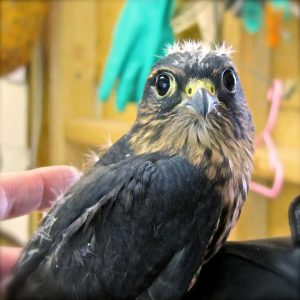 These little Falcons are extremely active and vocal; their sound is very distinctive they emit a piercing “kee-kee-kee”. Rarely seen perching unless they are consuming their prey, Merlins are usually in the air, where they capture their prey on the wing. Once prey is spotted they chase relentlessly and close in, hitting the prey with their talons, killing it instantly. Due to their power and speed they are able to capture birds the same size as themselves. Although birds make up over 90 percent of their diet, they will also catch insects, especially large dragonflies and moths, and will occasionally eat small rodents.

Merlins are one of the few raptors that do not mate for life. They usually nest in trees or in the sides of cliffs and they do not build their own nest, rather they will reuse an old crow or raven nest, or use a tree cavity. The female bird will do most of the egg incubation and the male will bring her food and also feed the young when they are first hatched. During the nesting season, the Merlin is very territorial and this is the time when they are extremely vocal. Two to five eggs are normal for these birds and the young fledge twenty-nine days after hatching, but will continue to be dependent on their parents for another month. Crows and Ravens pose a significant threat to the eggs and the young, but the greatest threat facing these birds now are cats, particularly feral cats. Cats are preying on our local songbird populations, resulting in a shortage of food for the Merlins. In addition to predation by cats, the songbirds, in certain areas of North America, are also showing signs of sickness due to the West Nile virus. Ultimately this could have a dramatic effect on the Merlin’s populations if they lose their valuable food source. The latest Merlin arrived from Quadra Island where it was ambushed by a group of feral cats, fortunately it was rescued, none the worst from the encounter. This is only the second Merlin rescued at the center in the last two years as their numbers seem to be on the decline. It is estimated that there are over 100 million cats in North America which will continue to add to the decline in songbirds. Small falcons and hawks are difficult patients to rehabilitate, especially the young, due to their methods of capturing prey; they are also very hyper and easily stressed. Normally we return our patients to the territory they came from but in this case this may have to change to a more suitable area that is cat free.

A reminder to be vigilant when driving at any time of the day, I have witnessed several deer being hit on the roads around the Comox valley and it is a sad sight to see, if safely possible, please stop and move the animal to the side of the road so that scavengers are not hit. Please leave fawns where they have been hidden in the grass, the mother will usually be close by, do not attempt to feed and care for them; we have had two very sick fawns this year, partly due to them being fed cow’s milk.