Man’s oldest companion is a bird that is very familiar, though it is shunned by many. When we think of a pigeon it is often with negative thoughts, as they tend to be a messy nuisance. Records dating back to ancient Roman and Egyptian times show that pigeons were an important food source; the young birds (squabs) were a delicacy. Nothing was wasted, especially their high nitrogen feces that was used to fertilize crops. It was evident to these ancient people that the pigeons were easily tamed and could also be trained to complete tasks. They discovered the pigeon’s natural instinct to return to their home if they were taken to a different location; this talent was then fine tuned and they became carrier pigeons, delivering messages to other towns. Distances that would normally take weeks to cover on foot now could be reached in a matter of days. Carrier pigeons continued to be used as delivery birds in more modern times and were invaluable in times of conflict where they were sent to deliver sensitive, secret material. 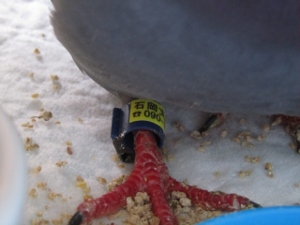 Homing pigeons are still used today, but their homing ability now has a new purpose as they have become racing pigeons – a hobby and sport that can see them cover vast distances. How can they find their way home from a location they have never been to? This is a never ending question and has many theories, some have been studied and seem factual but there are no fast answers and new ideas abound. Young pigeons are strongly imprinted on their “lofts” or homes soon after hatching; they are then taken to a new location and released to find their way home. Gradually the distances are increased until they can meet the required distance of the race. A successful racing pigeon must be tenacious, possess great speed and endurance and strong orientation skills. To navigate their way home, the pigeons use a combination of magnetic poles, astronomic and landmark location and olfactory location (sense of smell).The latter seems farfetched but in one study the birds had the olfactory nerve severed and they failed to return home.

Six years ago MARS rescued a racing pigeon that appeared to want to hitch a ride on a Coast Guard boat that was en route from Haida Gwaii. The pigeon landed on the mast, then promptly fell to the deck, totally exhausted. It was established from leg bands that the bird came from Japan. Pigeon racing has become a huge sport in Asian countries and also a very lucrative one where they bet on the race results; if the birds fail to return they are usually deemed a failure and abandoned. In this pigeon’s case its navigational skills were rewarded for covering thousands of miles. After quarantine and much paper work, the trans-pacific flier was returned to Japan by more conventional means, namely a plane.

Last month MARS encountered another “lost pigeon”, once again the bird had an epic journey. The pigeon was thin and severely emaciated and loaded with a parasite that attacks weakened birds. Following wildlife protocol, the pigeon spent the month in isolation at MARS, recovering from its ordeal and shedding the parasites; gradually its strength and weight returned to normal. The bands on the pigeon’s legs revealed that it was also Japanese, one band was a magnetic chip that recorded departure and arrival time back to the loft during race day, and the other leg had information about the owner with a cell phone number. Through a friend of one of our volunteers who is living in Japan we managed to contact the owner of the pigeon who indicated he did not want to go to the expense of shipping the bird home. After being declared as a “migratory bird” the pigeon was able to stay in Canada and was adopted by Doug Chadwick, President of the Nanaimo racing pigeon club. Doug indicated he would use the pigeon as a breeding pigeon and may at some time race it again. When asked about the status of racing clubs and pigeon fanciers, Doug replied that this is a dying hobby. Raising and racing pigeons requires a large piece of property to house the birds (he has 130); they are also high maintenance, taking a lot of patience and training. Unfortunately, he said today’s young people are more interested in high tech hobbies; though homing pigeons, in my mind, are skilled GPS technicians.