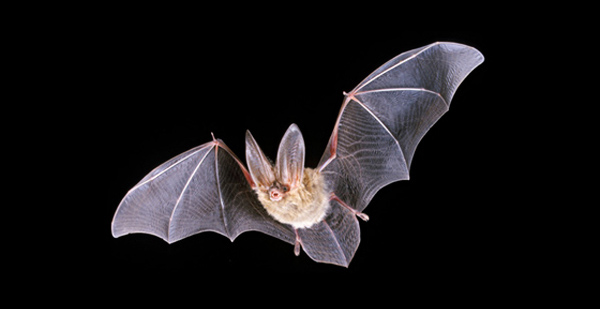 Halloween conjures up everything “spooky” and many creatures are feared when in actual fact they are harmless and really cool. Bats are one species that are often misunderstood and sometimes persecuted. There are many myths about these fascinating little mammals and although they do have the potential to carry rabies, they are not aggressive and are not known to attack humans.

There are over 1,000 species of bats in the world – nineteen species live in Canada, sixteen species call British Columbia home, and ten species reside on Vancouver Island. Bats are the only mammals that can truly fly; flying squirrels only appear to fly but in fact use a combination of jumping and gliding and cannot achieve sustained flight as they lack wings. Like all mammals bats give birth to live young that are nursed and fed milk from their mothers.

There are many interesting bats but one of the more unique species is blue listed in B.C. and is found in the Comox Valley; the Townsend’s big-eared bat which is also known as the Western big-eared bat and is unmistakable due to its enormous ears. Summer habitat for these bats includes old trees and buildings, caves, crevices, and abandoned mine shafts where they will either roost in colonies or alone. Some of these bats will migrate short distances in the winter but most will hibernate. During the winter they choose a location that provides a constant temperature and humidity – they have the ability to waken and drink the water droplets that have collected on their fur which keeps them hydrated. By making sure they have built up their fat reserves prior to hibernation and by dropping their heart rate and body temperature, they can survive the winter for six months. 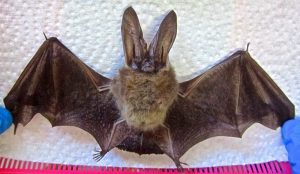 Townsend’s are medium sized bats – their bodies are 10 centimeters long with a 28 centimeter wingspan and they weigh between 7 and 12 grams. Their fur is pale grey or brown on the back of their bodies and buff colored underneath. Their ears can be laid back reaching halfway down their backs. When hibernating or roosting these bats have the ability to curl up their ears and then uncurl and extend them forwards when in flight. Like all bats they have fine membranes that are attached to elongated forearm and finger bones, and another that connects the back legs and tail. In addition to providing them with flight, the hooks on their wrists and the claws on their feet help them to groom their fur and give them the ability to crawl on the ground. The lower membrane will also act as an “apron” when delivering their young.

All bats have remarkable hearing which makes them formidable night time hunters that use echo location to pin point their food. They are able to produce a sound in their larynx that is propelled out through the nose and mouth. This sound bounces off prey or other obstacles and by analysing the echo that returns they can determine if the object is prey or predator. Bats are very specific in their choice of food. Many are insectivores and the Townsend’s bat will use its “apron” to collect insects whilst in flight. Others prefer fruit or nectar, and the vampire bat feeds on a mammal host – fortunately they are only found in tropical areas. Bats also play an important part in pollination.

As winter approaches, bats must go on a feeding frenzy to increase their body fat in readiness for hibernation; once they awaken in the spring they must be ready to produce their young. Bat “pups” are born blind and naked, once delivered in the “apron” they crawl their way up the mother’s body and use hooked teeth to attach to a nipple. They will stay clasped to the mother for 3 weeks, growing rapidly. Once they are covered in fur and become too heavy for the mother to fly, they will leave and start to fend for themselves.

Bats are fairly rare visitors to M.A.R.S. This year we were fortunate to rescue a Townsend’s bat which was found outside a school in Royston. Due to the location and number of students the bat was rescued once the school was closed, unfortunately it did not survive. It is very important not to touch or handle a bat, any bat that has been handled has to be euthanized as there is always a chance it may be carrying rabies. Bats that are at roost are not likely to pose a problem and should not be disturbed.

Bats become prey to owls, raccoons, snakes and unfortunately cats. The biggest threat to bats is the loss of habitat; many disused buildings are torn down, caves have become a favorite of spelunkers, and mines are closed off. If a bat should fly into your house, open all the windows and close the doors, usually the bat will quickly find its way out. Have a happy Halloween with one less spook to worry about!

To report injured wildlife please call 250-337-2021 (Please note we no longer have the emergency pager).