The Amazing Work of the Mountainaire Avian Rescue Society 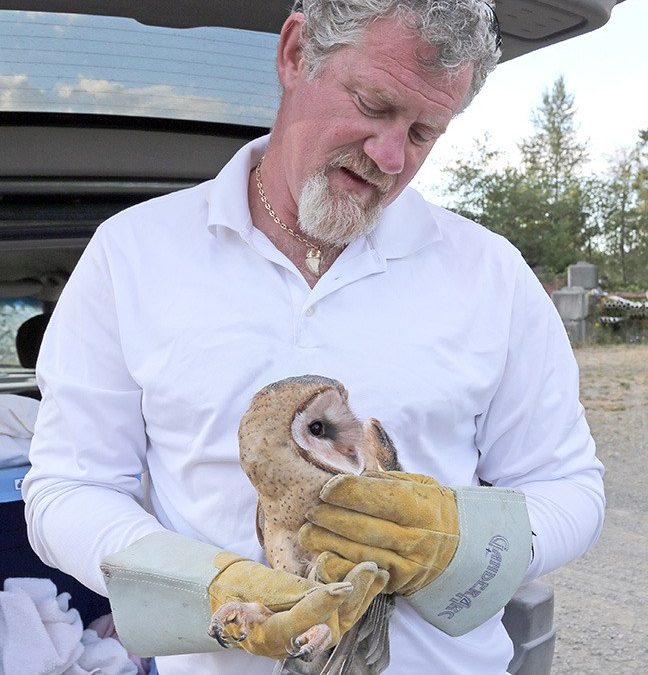 Reg Westcott, supervisor of wildlife care at the Mountainaire Avian Rescue Society, released a young barn owl back into the wilderness Thursday afternoon.

“It was a baby that had fallen from its nest,” said MARS manager Robert McLennan, of the rescue at 19 Wing, two months ago. “Luckily it was still alive.”

MARS staff did the original assessment, then shipped the owlet down-Island to The Raptors, an avian recovery/rehab centre in Duncan, for it to be nursed to a stage where it stands a good change of survival.

It was one of two releases MARS had last week.

On Friday, MARS workers released a young eagle, after eight days of rehab.

“That one was a fledgling who didn’t successfully fledge, so it was on the ground when we found it,” said McLennan. “He was emaciated and covered in parasites. So we spent eight days removing the interior and exterior parasites… it proved to us it had the ability to fly… and we released it.”

For an outsider, these are great stories, or at very least, ideal photo ops.

For those associated with MARS, it’s just another day of work.

For the past 21 years, the Mountainaire Avian Rescue Society has been operating its Wildlife Rehabilitation Centre on Headquarters Road, southwest of Merville.

The MARS objective is two-pronged: To provide a safe, stress-free environment for wildlife to recover; and to contribute to the knowledge and understanding of wildlife by participating in research, and sharing information with wildlife and professional organizations, and the general public through meetings, lectures, displays, workshops, seminars, conferences, reports and publications.

“Then we generally have two or three volunteers at any time,” said McLennan.

There is no vet on hand. All veterinarian procedures are handled off-site, through a couple of vets who offer their services to the society.

Currently there are 13 birds in the facility.

McLennan said the barn owl incident is a perfect example of how the new facility will help. Once the team moves into its new home, birds will not have to be shipped down-Island for tasks as simple as weaning and learning to fly.

“That’s one of the reasons we are so excited about moving to this new facility, because then we will be able to do the work ourselves,” he said.

MARS will be moving into its new 11-acre wildlife hospital and interpretive centre in the spring of 2017. Total cost of the facility is estimated at $1.5 million. MARS is halfway to its fundraising goal for the new facility.

MARS relies on public funding, grants and donations to remain soluble. The Comox Valley Record, Thrifty Foods and Royston Roasting are hosting another Caring for a Cause breakfast in the parking lot of the downtown Thrifty, Friday morning 8-10 a.m., with all proceeds going to MARS.